The reason we are The Window Treatment Specialists is because we research new technologies and the difference they make to our clients’ lives, our lives and your lives!

The stage was set for a 12 month experiment to experience all 4 seasons with and without Insulating Window Film. My old double glazed patio doors had 3M Thinsulate CC 75 window film on the left hand side and nothing on the right hand side.

3M Thinsulate CC75 Film is an Insulation Window Film, which is a total misnomer because it works by reflecting heat rather than insulating. It is less than a tenth of a millimetre thick and is applied internally to the window pane. Leave the film on and it will be there for twenty something years as an integral part of the window system. 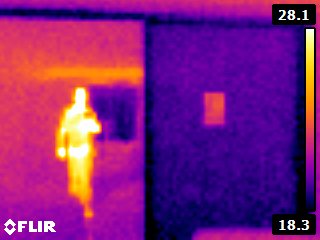 That’s me in the thermal image. It is taken with a special camera that detects heat rather than light. This is the only picture in the whole wide world that makes me look hot.

So let’s start this story with the untreated window. During the Autumn, Winter and Summer I would typically feel cold when in close proximity to the glass. It feels as if a draft is coming from the window. It is not a draft though. What is actually happening is that I am radiating some of my ‘hot’ body heat to the ‘cold’ glazing. Secondly, I am losing heat more from the side of my body closest to the window, which increases the sense of being chilled.

In fact, the heat from any object inside the room is radiating heat as long as it is warmer than the colder glass. Most of that radiated heat goes straight out the window.

Look carefully at the right hand window and you might be able to see the A4 3M Thinsulate CC75 film sample that I put on the window. You can see the heat being reflected back.

Now let’s take a look at the left hand window. You can see the warmer objects in the room being reflected back. I am standing 3 metres from the window and almost all my heat is reflected back into the room.

What was really interesting is that when I stood right next to the glazing I could feel my own heat reflected into my face, which is weird sensation at first. The best way I have found of describing it is to compare it with adjusting the temperature upwards in the shower. The water feels really hot for a few seconds before the body adjusts to the new temperature. I have grown to love the feeling of the heat being reflected back. The 3M Thinsulate CC75 window film rejects up to 38% of the heat meaning that over a third of the buildings heat loss will be eliminated.

In the summer I usually rise with the beautiful but rather noisy dawn chorus that the birds deliver to my open windows. My home office desk is located next to the filmed window. I was frequently grateful for the additional warmth as overnight temperatures can be low even in the summer.

The patio windows face East and I get the morning sun which is low in the sky. When we do get sunshine it is often rudely interrupted by a passing cloud resulting in it feeling suddenly cooler before the sun makes another appearance. It takes the human body about 10 minutes to adapt to thermal changes during which time we are distracted.

I find it is much easier to concentrate behind the filmed glass as I was only affected by the glare and not by the heat changes. Hint - we do amazing 'intelligent' blinds.

About 50 percent of the sun's radiant heat is rejected whilst virtually all the natural light is transmitted. The heat rejection would have been higher if the windows had been single pane rather than double glazed. This is because some of the absorbed heat does not make it back through the insulating cavity of the double glazed window and is re-radiated internally.

After the 4 seasons were over I had the whole house filmed in 3M Thinsulate CC75 Window Film to take advantage of the greater comfort and to protect the new wooden floors I was having put down from fading.