Click Here To Speak To A Window Film Specialist

Cooling Window Film For Your Conservatory Roof & Side Glazing

Are you tired of overheating in your conservatory, or do you feel like you're unable to use your conservatory without the need for sunglasses? Maybe you're worried about your furniture and artwork fading. Join the customers for WindowTreat that invested in their home with conservatory cooling window film.

Conservatory window film can vary in price. Conservatory Window Film is a technologically advanced product, packing around 200 layers of window film into a thickness less than that of a post-it note. 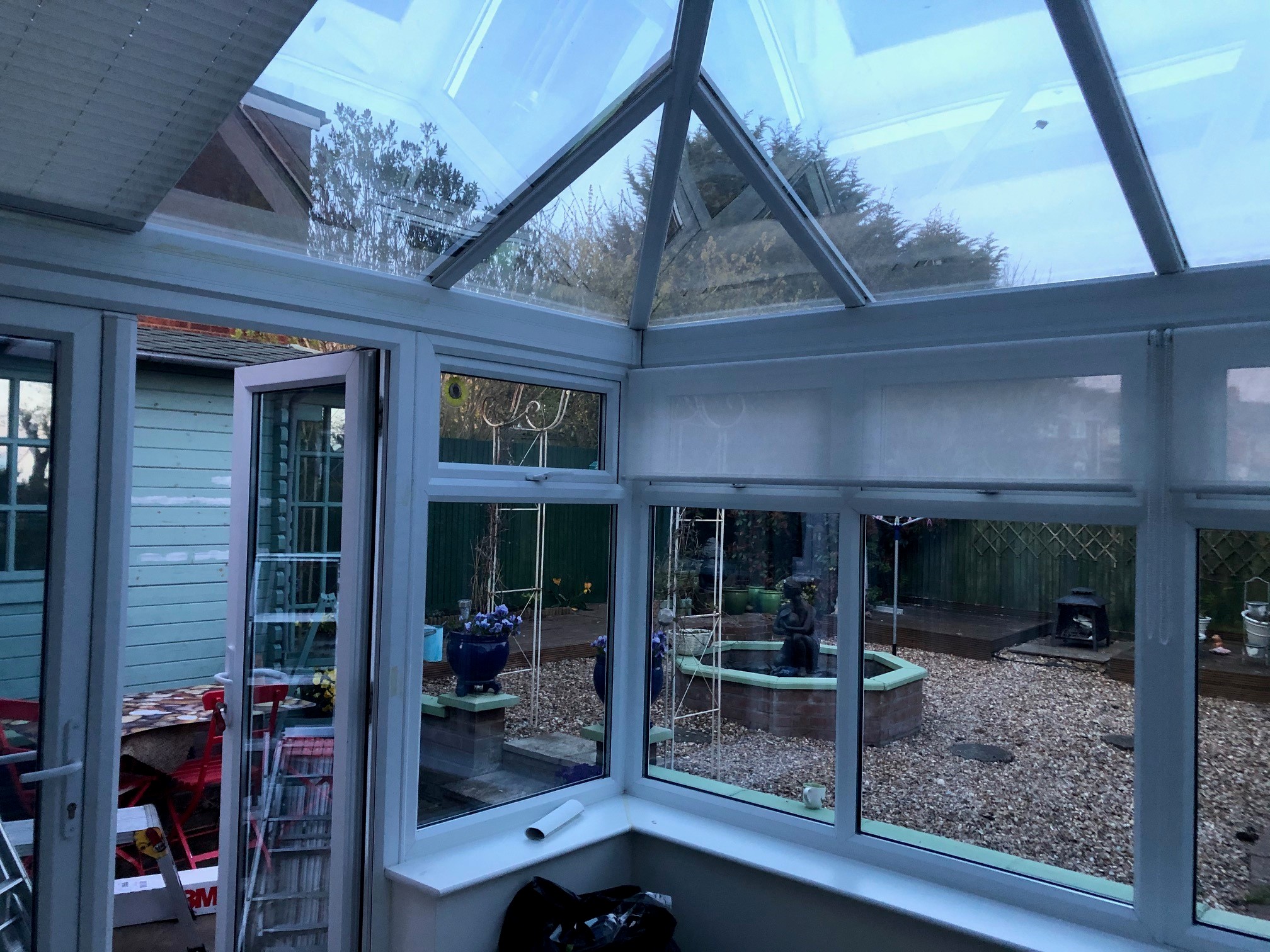 Book a call with a bi-fold door blind specialist, it's simple to do - just find a 'Get a Quote' button on this page and book your callback. The first step is to get the facts about what you are looking to achieve.
Book Now > 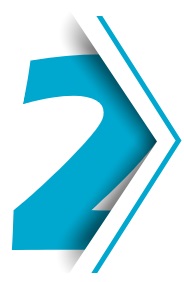 Get Advice
From A Specialis

We will set up a ZOOM or TEAMS video conference to take you through the best options for you. Usually within 48 hours of the first contact. 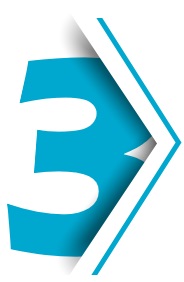 Our installers are referred to as gems. After a smooth installation, you will enjoy the comfort for years to come.

Discover The Perfect Window Film To Fit Your Needs. 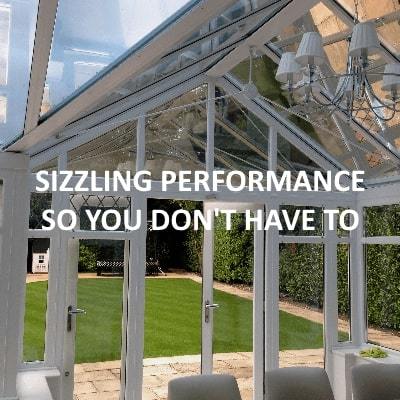 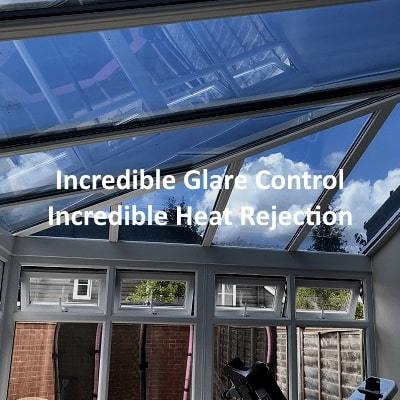 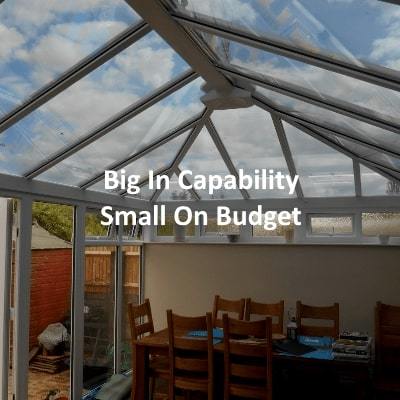 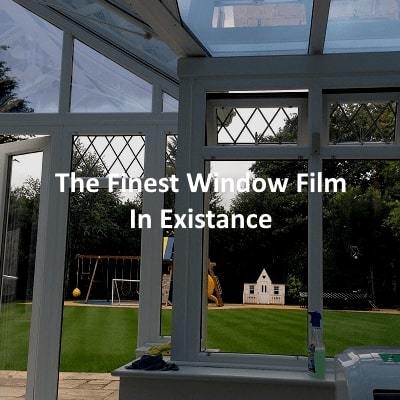 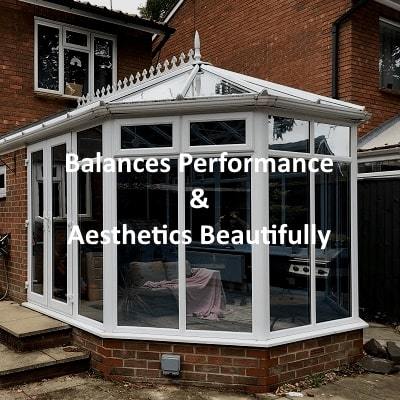 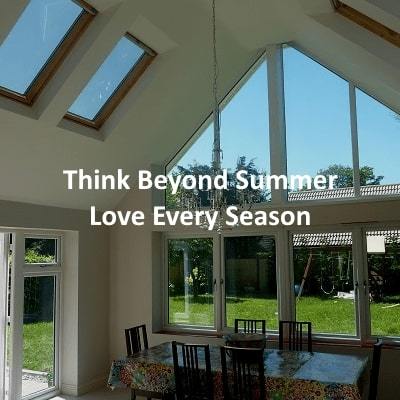 A living room to relax in, thanks to conservatory window film.

The floor to ceiling glass of a conservatory brings the outdoors in, making it the perfect place to relax and enjoy the views of the garden, whatever the weather. To add to the relaxing atmosphere of the conservatory, some of our customers have place scented candles around the room. Unfortunately, the Sun’s harmful rays would disrupt the relaxing environments. That’s why conservatory solar window film is the perfect solution to bring you closer to comfort and closer to the outdoors.

Conservatory window film will help you to sit back and relax after a long day.

A children's playroom, thanks to conservatory window film.

Their two young children can not play indoors and outdoors during the summer months, with their toys readily available. The 3M All Seasons 35 providing Sun Protective Factor (SPF) 280 for the children and doing an amazing job at reducing embrittlement and fading for their toys. Toy storage boxes, brightly coloured pictures, little chairs ad cushions add to the fun and will do for three times longer than before.

Additionally, when Lowenna’s mum comes across, the conservatory makes as an extra bedroom.

A roof for growing plants, and propagating, thanks to conservatory window film.

A famous architect with a love of plants enjoys a 15 Metre x 6 Metre pitched roof glazing over the heart of his apartment. It is much like a garden underneath. A biplane is suspended from the roof reflecting the owner’s passion for aircraft.

The architect reported back that all of the plants benefited from the heat reduction. (Apart from the cactus).

Another customer, Sonya uses her double-height conservatory as a garden room and for the grandchildren to play in. The soil before would dry out quickly and leaves would be burnt in the excessive heat from the sun.

The problem here was solved with 3M All Seasons 35 for the conservatory rood window film, which is unparalleled amongst internal solar window films in tackling the radiant heat of the sun whilst flooding the space with abundant natural light that is essential for plant life and photosynthesis.

Our temperate climate means that it can be sunny one moment and then a cloud glides through the sun's path briefly providing shade before moving on to pastures new. Our bodies take about 10 minutes to adapt to thermal changes during which we are subtly distracted. The constant changes in radiant temperature cause havoc on our workday.

Sandeep chose Low Reflect Extreme Conservatory Window Film for the conservatory roof window film to reduce solar heat gain and glare on the computer screen. 3M Prestige 70 External was chosen for the side glazing on the two elevations that are most affected by the sun. Sandeep prefers to keep the doors and windows shut whilst his young children play in the garden. Consequently, a belt-and-braces approach to reduce as much solar heat gain as possible was embraced.

Sandeep's desk is positioned next to the windows. In winter, the glass is cold compared with Sandeep. Sandeep is 33 degrees. I know, we are very scientific when it comes to finding a solution for comfort and happiness! Sandeep risked radiating body heat to the colder glazing that is in proximity. This would give a feeling of a draft. 3 panes were filmed with 3M Thinsulate Climate Control 75 to reflect 86 per cent of the radiant heat back into the space improving winter comfort dramatically. A radiant heater pointing towards the desk and treated windows provides effective and very efficient heating instantly. The saving in heating the conservatory is about £200 per annum.

The 3M Prestige 70 and 3M Thinsulate CC75 are virtually undetectable. What this means is that the aesthetics of the conservatory are unchanged and a big financial saving because there was no need to film all the windows.

Helen has a table football table that was once her children's. Helen's young grandchildren are now the beneficiaries. The subtle difference with this table is that the UV radiation, radiant heat and natural light has faded the players' shirts. They all appear the same. Much of the footballers' dignity has been dented by the embrittlement of their plastic shorts. Some shorts have broken away over time and no longer protect their modesty.

If Helen replaces the football table, then it will stand the test of time 3 times longer with the 3M All Seasons 35 for the conservatory roof window film and 3M Prestige 70 External on the side glazing.

Tony loves gaming and uses his PlayStation in the conservatory with a giant screen. Excessive heat and persistent eye strain from unwanted reflections tainted the experience. Low Reflect Extreme Conservatory Cooling Window Film made the radiant temperature comfortable. The massive glare reduction, you have to go with a darker conservatory window film, ensured success for Tony on the big screen as visual discomfort became history.

The 'Safe Pair Of Hands' For Your Window Film

The Buy With Confidence Scheme operated by Trading Standards sets the bar high for your window film' installation. Trading Standards conduct tests on our customer-facing processes to ensure that you can move ahead with the right supplier for you.

Our installers are the elite in the industry, They take immense pride in their work. You will find your blinds installer polite and will keep your home clean throughout the window film installation.